Together with our local organizers we’ve planned a day out of the city full of Ancient Greek History and local wines tasting. We are planning to visit the famous Aristotle’s School, the Museum of Aiges-Vergina and the emblematic Ktima Kir-Yanni Winery.

Drop off: Hotel in Thessaloniki

-VAT and all taxes

Minimum of 40 participants per group/bus

You can register here.

Place of universal interest, the ruins of Aristotle’s School, is a found only 2 kilometers away from the contemporary Naoussa, in the district of Isvoria Here is the place with the racing water and the deeply-shaded caves, mentioned by the ancient writers, where the greatest philosopher of the antiquity taught the greatness of classical Greek thought and the ideals of the Platonic philosophy to the King’s of Macedonia, Phillip II, son, Alexander and the other nobles of the Macedonian court. The encounter of these two Great personalities of the ancient world at the Nympheon of Mieza would definitely affect the future of mankind, and of Western Civilization. The area of the Nympheon, that is the sanctuary dedicated to the Nymphs, is a very impressive natural landscape, where the ancient remnants - a wall prop of a two-floored arcade with Ionic columns forming a Π- combined with the three natural caves which are found there, constitute the main grounds of the School. The vertical surface of the rock, where the openings for supporting the roof’s girders are discernable, comprised the back-end of the shady stoa, (built in 350 B.C. and later), where Aristotle taught «the doctrines of morals and politics” (Plutarch VII, 668) to the youths of the Macedonian Nobility. The landscape, where the Great Teacher rambled with his students on the full vegetation riverbank trails, among calm and cool streams of water, gushed from the springs around, is completed by an even greater cave, a little further off, with two carved entrances, obviously for devotional use. 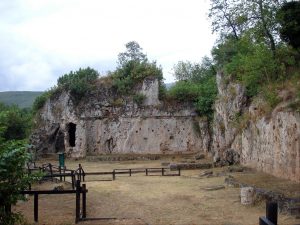 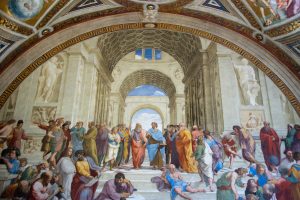 The excavation by Professor Manolis Andronikos and his associates under the Great Tumulus of Vergina village in Imathia, Central Macedonia in 1977 brought to light one of the most important archaeological discoveries of the20th century in Greece. Today’s Vergina (Ancient Aigai), in the foothills of Mt. Pieria, was the first capital of the ancient kingdom of Macedonia, called Aigai. The site of the Royal Tombs under a modern roof hosts the main excavation, as well as an exhibition of the major finds from the burials. It is protected by UNESCO as a world cultural heritage and comprises a unique discovery of an enormous universal impact.

The exhibition’s shelter has the external form of the Great Tumulus, a man-made mound, while the underground building has been housing since November 1997 tombs and treasures found in them. This sheltered group includes three Macedonian tombs: the intact tomb of Philip II (II) with a hunting scene fresco painting. Intact is also the so-called Tomb of the Prince (III), which may belong to Alexander IV, grandson of Philip II and his son Alexander the Great, and another ruined and plundered Macedonian tomb (IV) of the third BC century.

The visitor will also see a plundered a cist family tomb (I), known as the “Tomb of Persephone”, with the incomparable fresco of the abduction of Persephone by Hades and a ruined building named “Heroon”, probably used for the worship of the dead royal members buried next door. Some of the major finds exhibited here are the two golden urns, containing the bones of Philip II and one of his wives, two oak and one myrtle golden wreaths worn by the royal dead. On display is also the rare gold-and-purple embroidered cloth, which wrapped the bones of the royal wife, along with her golden diadem of unique art, two ivory symposium beds, weapons and armor of Philip II, valuable symposium utensils of the royal family, and the silver urn of “Prince.” 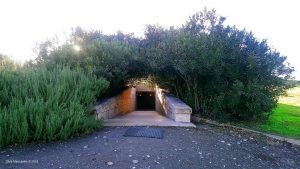 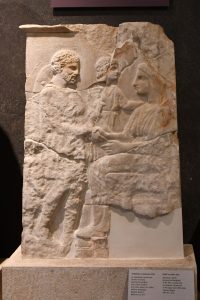 Enjoy a glass of the famous wines of Naousa like kings, emperors, merchants or travelers have for hundreds of years. Visit the vineyards of great wineries and get to know the people behind the labels. Hide between the oak barrels and try a glass of Xinomavro; the taste of Naoussa will linger with you long after you leave!

Naoussa rests on the foothills of the Vermio Mountains where Dionysus, the god of wine himself dwelt. He or the ancient Greeks perceived something about wine in the region to merit his presence there and maybe, who knows, even blessed the origins of viniculture itself!

In modern times, the first recorded evidence of viniculture dates back to 1700, when its reputation spread far and wide for being the best wine in the Ottoman Empire. At that time, the Xinomavro, Negoska, Naousseiko, Sefka, Prekniariko, and other varieties of grapes were cultivated in the area’s vineyards.

Naoussa was where the first modern Greek wine was bottled in 1905, the famous “Naoussa Boutari”, while in 1971 the wine-growing region of Naoussa was identified as a Protected Destination of Origin (PDO) region. 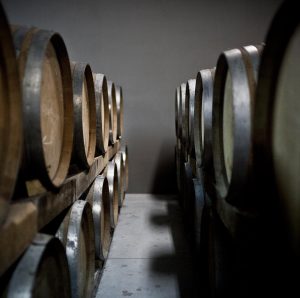